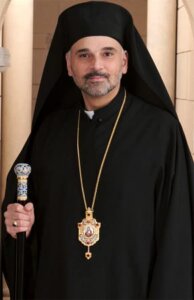 His Grace Bishop Alexander was consecrated to the Holy Episcopacy on December 5, 2004. His consecrating bishops included His Beatitude Ignatius IV at the Patriarchal Cathedral in Damascus, Syria. He was enthroned as the first Diocesan Bishop of Ottawa, Eastern Canada, and Upstate New York at St. Elias Cathedral in Ottawa on June 12, 2005.

Bishop Alexander was born into an Orthodox Christian family in north Lebanon in 1956. He attended Tripoli Boys’ School and after passing the Lebanese Baccalaureates I and II, he enrolled in the American University in Beirut. Due to fighting in Lebanon, he was unable to continue his education there and instead moved to the U.S. to attend the University of North Texas. He graduated with a B.A. in 1978 and an MBA in 1980. He returned to Lebanon, where he worked from 1981 to 1985 for a company that imported raw materials for factories.

In October 1985, he returned to the U.S. and found work as a supply manager at Prince George’s Hospital in the Washington, D.C. area. After eight years in that job, he worked for a local company that exported medical supplies to the Middle East and then in 1995 was hired by Federated Stores to work as a sales associate for Bloomingdale’s in Rockville, Maryland. While there, he wrote to Metropolitan Philip requesting his blessing to enter seminary. He was directed to attend St. Vladimir’s Theological Seminary in Crestwood, New York, from which he graduated in 2000.

Bishop Alexander was ordained to the Diaconate on January 9, 2000 and to the priesthood on April 9, 2000. He was elevated to the Archimandrite on July 4, 2004. On December 5, 2004, he was consecrated to the episcopacy by Patriarch Ignatius IV (Hazim) of Antioch in Damascus, Syria, and he has served as the Bishop of Ottawa, Eastern Canada, and Upstate New York since that time.