Sunday of the Blind Man

In the gathering places bless God the Lord, from the springs of Israel. Save us, O Son of God, Who art risen from the dead, who sing to Thee: Alleluia.

Let us believers praise and worship the Word; coeternal with the Father and the Spirit, born of the Virgin for our salvation. For, He took pleasure in ascending the Cross in the flesh to suffer death; and to raise the dead by His glorious Resurrection.

Though Thou didst descend into the grave, O Immortal One, yet didst Thou destroy the power of Hades, and didst arise as victor, O Christ God, calling to the myrrh-bearing women, Rejoice, and giving peace unto Thine Apostles, O Thou Who dost grant resurrection to the fallen.

THE EPISTLE FOR BLIND MAN SUNDAY
Thou, O Lord, shalt keep us and preserve us. Save me, O Lord, for the godly man is no more.
The Reading from the Acts of the Holy Apostles. (16:16-34)
In those days, while we the apostles were going to the place of prayer, we were met by a slave girl who had a spirit of divination, who brought her masters much gain by soothsaying. She followed Paul and us, and cried out saying: “These men are servants of the Most High God, who proclaim to us the way of salvation.” And she did this for many days. But Paul was annoyed, and turned and said to the spirit: “I charge you in the Name of Jesus Christ to come out of her.” And it came out that very hour. But when her masters saw that the hope of their gain was gone, they seized Paul and Silas and dragged them into the marketplace before the rulers; and when they had brought them to the magistrates, they said: “These men are disturbing our city, and they, being Jews, are setting forth customs which are not lawful for us to receive or observe, since we are Romans.” The multitude then rose up together against them, and the magistrates tore their garments off them, and commanded to beat them with rods. And when they had inflicted many stripes upon them, they cast them into prison, charging the jailer to keep them safely. Having received such a charge, he cast them into the inner prison, and fastened their feet in the stocks. But about midnight Paul and Silas were praying and singing hymns to God, and the prisoners were listening to them, and suddenly there was a great earthquake, so that the foundations of the prison were shaken; and immediately all the doors were opened and every one’s fetters were unfastened. And the jailer, being roused out of sleep and seeing the prison doors open, drew his sword and was about to kill himself, supposing that the prisoners had escaped. But Paul cried out with a loud voice saying: “Do not harm yourself, for we are all here.” And he called for lights and rushed in, and fell down before Paul and Silas trembling with fear, and brought them out and said: “Masters, what must I do to be saved?” And they said: “Believe in the Lord Jesus Christ, and you will be saved, you and your household.” And they spoke the word of the Lord to him, and to all who were in his house. And he took them the same hour of the night, and washed their stripes, and was baptized, he and his entire household. Then he brought them up into his house, and set food before them, and rejoiced greatly, with his entire house, in that he had believed in God.

THE GOSPEL FOR BLIND MAN SUNDAY

The Reading from the Holy Gospel according to St. John. (9:1-38)
At that time, when Jesus was passing, he saw a man blind from his birth. And His disciples asked Him, “Rabbi, who sinned, this man or his parents, that he was born blind?” Jesus answered, “It was not that this man sinned, or his parents, but that the works of God might be made manifest in him. I must work the works of Him who sent Me, while it is day; night comes, when no one can work. As long as I am in the world, I am the light of the world.” As he said this, he spat on the ground and made clay of the spittle and anointed the man’s eyes with the clay, saying to him, “Go, wash in the pool of Siloam,” which means “Sent.” So he went and washed and came back seeing. The neighbors and those who had seen him before as a beggar, said, “Is not this the man who used to sit and beg?” Some said, “It is he;” others said, “No, but he is like him.” He said, “I am the man.” They said to him, “Then how were your eyes opened?” He answered, “The man called Jesus made clay and anointed my eyes and said to me, ‘Go to Siloam and wash’; so I went and washed and received my sight.” They said to him, “Where is he?” He said, “I do not know.” They brought to the Pharisees the man who had formerly been blind. Now it was a Sabbath day when Jesus made the clay and opened his eyes. The Pharisees again asked him how he had received his sight. And he said to them, “He put clay on my eyes, and I washed, and I see.” Some of the Pharisees said, “This man is not from God, for He does not keep the Sabbath.” But others said, “How can a man who is a sinner do such signs?” There was a division among them. So they again said to the blind man, “What do you say about Him, since He has opened your eyes?” He said, “He is a prophet.” The Jews did not believe that he had been blind and had received his sight, until they called the parents of the man who had received his sight, and asked them, “Is this your son, who you say was born blind? How then does he now see?” His parents answered, “We know that this is our son, and that he was born blind; but how he now sees we do not know, nor do we know who opened his eyes. Ask him; he is of age, he will speak for himself.” His parents said this because they feared the Jews, for the Jews had already agreed that if anyone should confess him to be Christ, he was to be put out of the synagogue. Therefore, his parents said, “He is of age, ask him.” So for the second time they called the man who had been blind, and said to him, “Give God the praise; we know that this man is a sinner.” He answered, “Whether he is a sinner, I do not know; one thing I know, that though I was blind, now I see.” They said to him, “What did He do to you? How did He open your eyes?” He answered them, “I have told you already, and you would not listen. Why do you want to hear it again? Do you too want to become His disciples?” And they reviled him, saying, “You are His disciple, but we are disciples of Moses. We know that God has spoken to Moses, but as for this man, we do not know where He comes from.” The man answered, “Why, this is a marvel! You do not know where He comes from, and yet He opened my eyes. We know that God does not listen to sinners, but if anyone is a worshiper of God and does His will, God listens to him. Never since the world began has it been heard that anyone opened the eyes of a man born blind. If this man were not from God, He could do nothing.” They answered him, “You were born in utter sin, and would you teach us?” And they cast him out. Jesus heard that they had cast him out, and having found him He said, “Do you believe in the Son of God?” He answered, “And who is He, Sir, that I may believe in Him?” Jesus said to him, “You have seen Him, and it is He who speaks to you.” He said, “Lord, I believe.” And he worshiped Him.

MEGALYNARION FOR PASCHA IN TONE ONE
The Angel cried unto her that is full of grace: O pure Virgin, rejoice, and again I say, rejoice; for thy Son hath arisen from the grave on the third day.
Shine, shine, O new Jerusalem, for the glory of the Lord hath arisen upon thee; dance now and be glad, O Zion, and do thou exult, O pure Theotokos, in the arising of Him Whom thou didst bear. 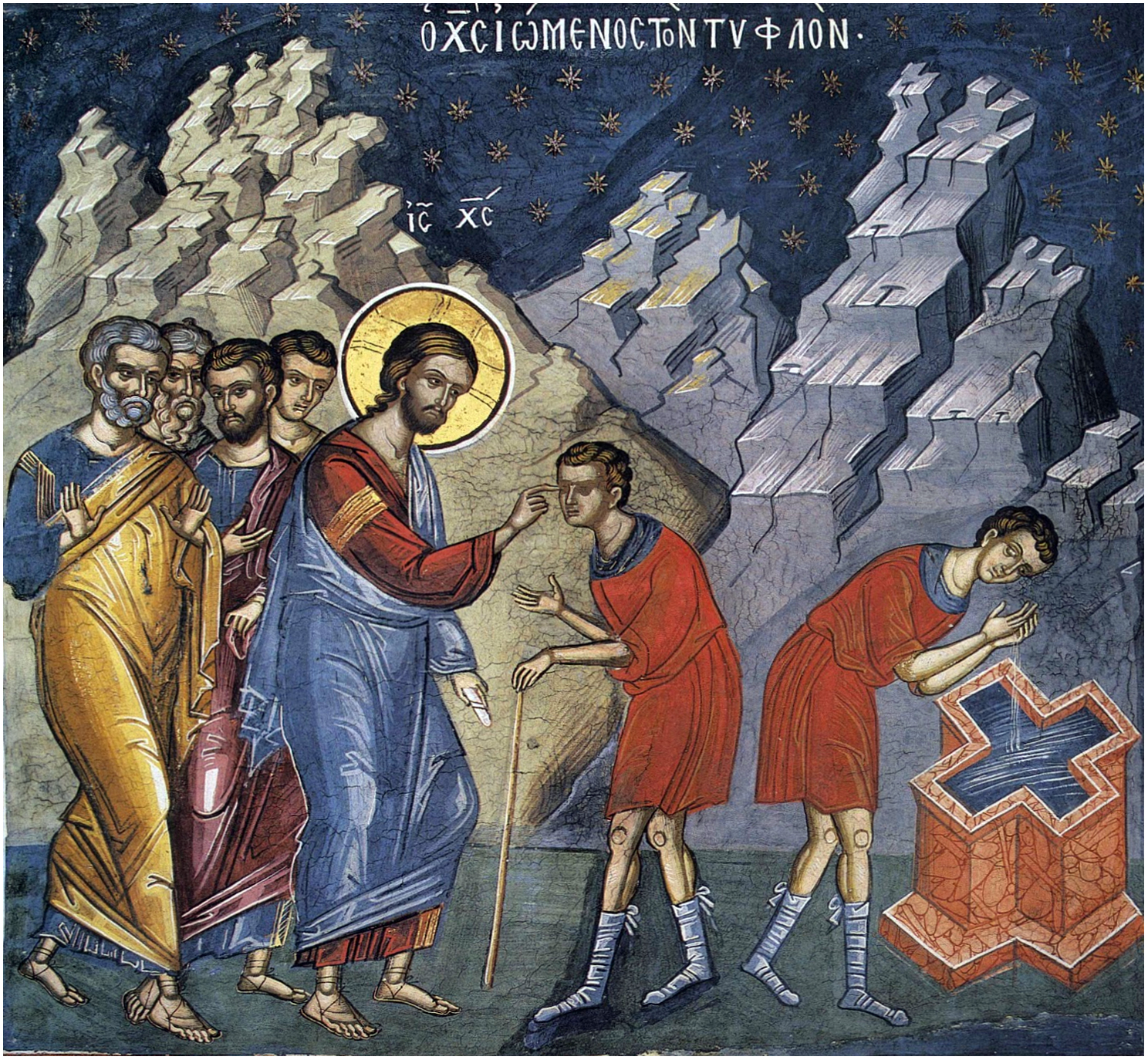