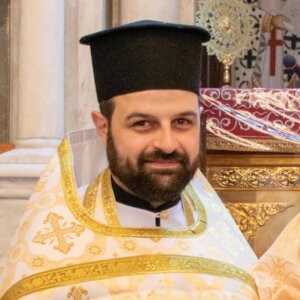 Abouna Elian was born in Homs, Syria, in 1987 to faithful orthodox family. He was an actively engaged in the Orthodox church Sunday Schools and young adults ministry at his home Archdiocese of Homs. He and his wife Khourie Maram got married in September 24, 2017.

He worked in Antiochian Orthodox Media Center AOMC in Balamand, Lebanon for 10 years where he made graphics, design, photo and video editing, magazine design in addition to write some spiritual articles.

He was ordained to the diaconate on December 26, 2019 in Homs-Syria and to the Holy Priesthood on January 2, 2020 by His Eminence George (Abou Zakhem), Metropolitan of Homs and its Dependencies, by the blessing of His Eminence Joseph Metropolitan of New York and All-North America to serve the faithful in the Antiochian Orthodox Archdiocese of New York and All-North America.

H.E Metropolitan JOSEPH assigned him to his current ministry as the pastor of Ss. Peter and Paul Antiochian Orthodox Church in Charlottetown – PEI.

Father Elian and Kh. Maram have a daughter Thea.