The start of the Orthodoxy journey was when Father Ron Parsons stayed with Stephen and his family for a month, holding services prior to baptising the family as the first baptised souls of Ss. Peter & Paul Antiochian Orthodox Church. (Spring 1995) His journey into the priesthood and the catalyse to founding an Orthodox Church in PEI. Fr. Ron and Fr. Maximus then visited many orthodox families worshiping at other churches in PEI and gathered enough support to start an Orthodox Church. Stephen was ordained a sub-deacon and later a deacon in 1996, and then in December 2002 was elevated to the holy Priesthood. In addition to a Bachelor of Arts Honours in English, he completed the Antiochian House of Studies – St. Stephen’s Certificate.

Fr. Stephen was born on Prince Edward Island, married his wife Tracey in the summer of 1984, and they have two boys David and Joshua. David and Danika were married at Ss. Peter & Paul Antiochian Orthodox Church and have three children: Maggie, Remi and Daisy. Joshua and Micalya were also married by Fr. Stephen at the church and are currently expecting their first child.

On August 24, 2014, Fr. Stephen Allen was elevated to Archpriest, by Bishop Alexander. On November 20, 2020, Fr. Stephen was awarded the title of MSM or Meritorious Service Medal for his humanitarian work with Santa’s Angels, adding M.S.M to his name.

Due to ill health, the V. Rev. Father Stephen Allen was retired from active service on October 9, 2021. 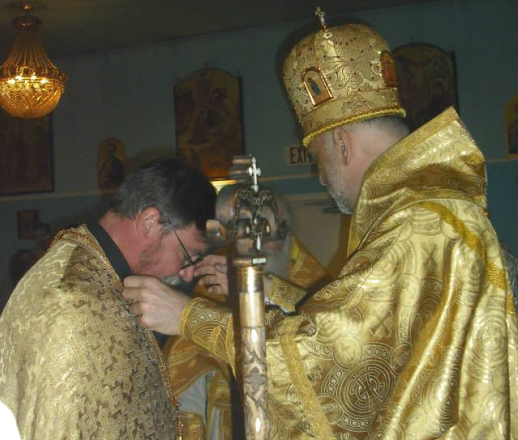